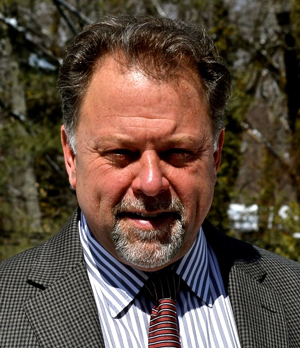 RICHARD L. HUTCHINSON, Esq.
RICHARD L. HUTCHINSON, Esq., our founder, president, and Licensed Broker graduated from Oyster Bay High School in 1982. He graduated with honors in economics and business management from Ithaca College, Ithaca New York in1986 after attending Hofstra University, Ithaca and the Ithaca London Center. He graduated from New York Law School with a Juris Doctor degree in 1990, and was admitted to the practice of law in 1990. Richard has over 25 years of experience in real estate transactions, mortgage related transactions, leasing, real estate litigation, zoning and land use, in addition to managing and rehabilitating rental apartments, houses and commercial properties. From 1998-2006 he served as the Village Justice of the Incorporated Village of Cove Neck hearing cases involving village zoning issues.

Richard , his wife Christine (a local chiropractor and founder “Lifequest Natural Healthcare” and of “Juicequest”) and their two children (both 10th generation residents of Hamlet) live work and play in Oyster Bay. Richard has been actively engaged in the community throughout his life. He started his working career on summer breaks working for John D. Weiler Landscaping and Dodds and Eder gaining extensive knowledge of the North Shore Geography. As an avid boater throughout his life, and his local geographic knowledge extends to the waterways surrounding the North Shore. He is currently the President of Hutchinson & Hutchinson, P.C. providing real estate legal services to the community since 1957,he is also the Vice President of the trustees of Matinecock Masonic Historical Society at 14 West Main Street, Oyster Bay and served on the committee to rebuild the Matinecock Lodge following its destruction by fire in 2005.

Richard’s vision for Counsel Rock Realty started in 2014, seeking to establish a full service brokerage in which he could integrate his experience in real estate transactions, his extensive knowledge of the community, and bring in marketing, technology and sales professionals in the industry with whom he has utmost confidence. His vision is to maintain an organization with particular expertise in the markets it engages, provide undivided loyalty and effective service for its clients, with a personal hands on approach, much like the old days of Oyster Bay. With today’s technology and the professionals it engages, its informal non-corporate environment, Counsel Rock can provide outstanding marketing, advertising, and promotional services to help you accomplish you sale or purchase.

ROBERT B. KELLY
ROBERT B. KELLY (Bob) is a resident of the Bayville and Oyster Bay Community for over 35 years raising his family in Oyster Bay . Bob graduated from Cary High School in Garden City. Bob has extensive experience in the printing industry, where he started and operated three (3) companies throughout his career. Bob became a licensed Real Estate Sales Person in 2006, and had been actively engaged sales as well as managing commercial and residential rental properties.

Bob is a 25+ year member of Matinecock Lodge in Oyster Bay. He has been a volunteer softball coach for PAL , and a volunteer in fundraising for Ducks Unlimited. He is a past member of Long Island Business Association.